SANTIAGO – Chile on Monday surpassed France to become the sixth country with the highest number of coronavirus cases in the world.

The South American country now has 298,557 cases of COVID-19 at the time of publishing, 932 postive cases more than Spain, according to official health ministry figures.

More than 3,000 new cases were reported during the last 24 hours, according to Minsal, while another 76 people lost their lives. The total number of virus-related fatalities has reached 6,384 since the pandemic began in Chile in mid-March. 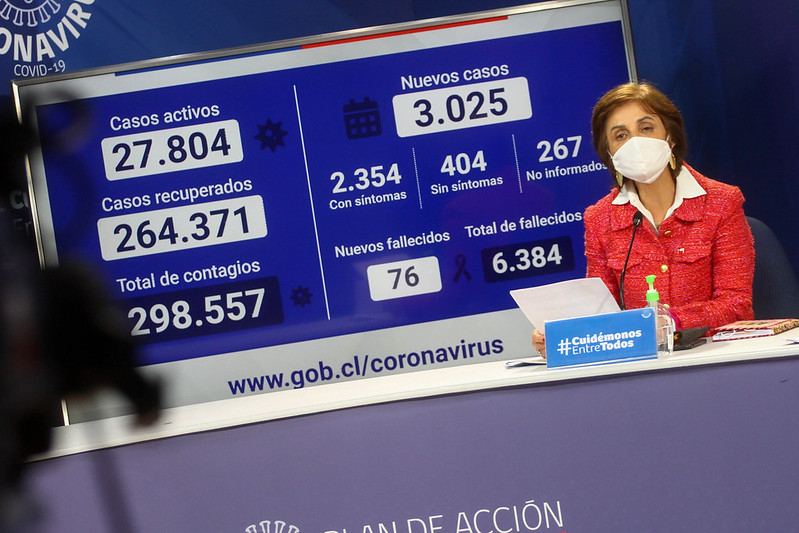 In his daily briefing, Health Minister Enrique Paris indicated that the PCR positivity figure dropped to 19%, which is “good for the country.” However, he emphasized that this “does not mean lowering your arms.”

Paris explained that 22% corresponds to the average of the past seven days and that 19% to the rate of this Monday.

“We will continue working and following the recommendations of the committee of experts and the institutions that want to contribute,” he added.

A total of 16,377 PCR examinations were carried out in the last 24 hours, the minister further said.

Meanwhile, the Chilean police said they have issued more than 964,000 temporary permits in the last 24 hours.

The measures include access to zero-interest loans, subsidized rent and the ability to defer mortgage loan payments for up to six months, Pinera said in a televised speech.

“The coronavirus pandemic…is hitting our middle class hard,” Pinera said, touting the fresh round of stimulus as a bailout at least 1 million families.

Unemployment crested 11% between March and May and is expected to continue to rise as lockdown measures in the capital Santiago take their toll. The central bank has predicted GDP will plunge by as much as 7.5% in 2020, the worst in 35 years.

Teams from nine countries of America, will compete the under 19 Pan American Cup of Volleyball, a competition that grants three places for the World Championship of the category in Bahrein. Six teams of the […]

Snow can be created on demand, say scientists

BOISE – A breakthrough experiment has shown how cloud seeding can help produce rain and snow. A team of scientists in the northwestern U.S. state of Idaho say they have obtained direct, quantifiable observations of […]

Chile and the End of the Liberal World Order

The old, liberal world order is over, says Foreign Affairs, the organ of the foreign-policy establishment. In the bygone days, Liberalism supposedly guided the ways of the world with its emphasis on cooperation, facilitated within […]