SANTIAGO – The government of Chile has cut the salaries of 693 of its members. The cuts ranged from 1% to 25%.

President Sebastian Piñera got off with a 10% cut, but 155 Members of The House, 43 Senators and 24 Ministers took the brunt of the cuts with a substantial 25% cut.

The move had been discussed in Parliament since the beginning of 2014, with most politicians asking for as much as a 50% reduction in salaries. The President set up a special Advisory Board (Consejo de Alta Dirección Pública) to take on the job of coming up with the percentage cuts in a way that would not be considered a conflict-of-interest. The new measure awaits the signature of the President to become law. This new law will also open up the door for additional cuts for some 10,000 public servants’ salaries.

The new measure was hailed on social media, with one blogger posting: “It’s about time they suffered (the politicians) a little bit too. We can’t be the only ones making sacrifices and going though misery due to this pandemic. I’m sure it won’t change their way of life, as it has ours, but at least it’s a step in the right direction.” 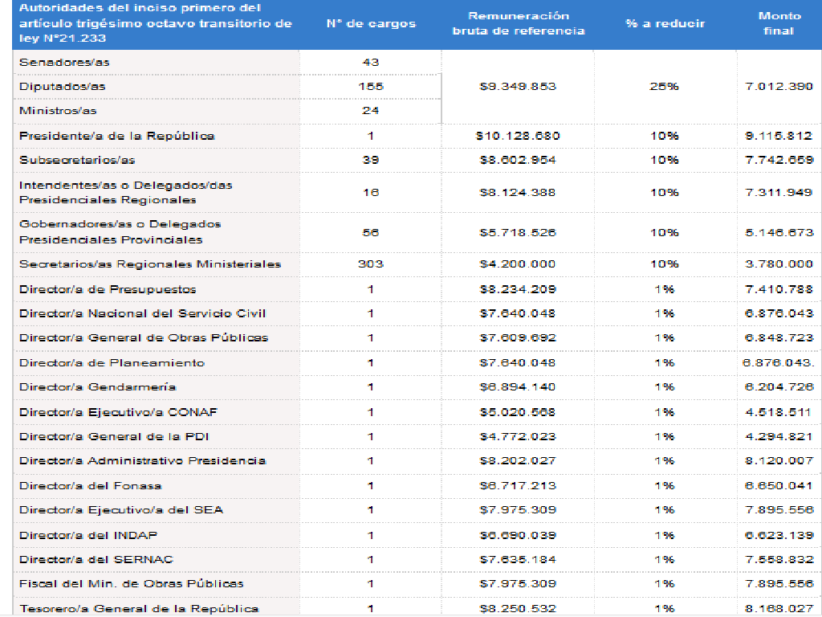 Once signed, the new law will also limit salaries to be voted on every four years. It also states that no public authority, regardless of his post, can have a higher salary than that of the President. There are now 66 posts which do so. Since the new law goes on to say that no one can have a higher salary than his boss, 10,529 affected workers might be looking for work elsewhere in what Senado.cl calls a “a leak of qualified personnel”

Senator Francisco Huenchumilla of the Araucania Region of Chile summed it up nicely by saying: “Starting today we parliamentarians will be separated from all that has to do with our remunerations.”

WASHINGTON – Chile’s President Sebastian Piñera called on President Donald Trump at the White House for talks that focused on trade, security and the humanitarian crisis in Venezuela. The South American country has been affected […]

Nicolás Maduro ‘not welcome’ in Peru

LIMA – Peru’s President Pedro Pablo Kuczynski has said that Venezuela’s leader Nicolás Maduro is “not welcome” at a regional summit to be held in his country’s capital, Lima, in April. Kuczynski cited “a rupture […]