SANTIAGO – Chilean authorities confirmed 39 new deaths Monday due to the novel coronavirus and the state’s death toll stands at 3,362.

As reported by the Ministry of Health, the latest figure corresponds to a drop compared to the previous days “due to the inscriptions” of the Civil Registry, a situation that occurs in the first post-weekend balances.

MINSAL undersecretary Arturo Zúñiga said that 5,143 new cases were reported in the last 24 hours, of which 4,660 were symptomatic. The total number of people who contracted the virus has reached 179,436.

There are currently 391 mechanical ventilators available, while 18,808 PCR examinations were carried out, for a total of 858,958.

“We have been working with the mayors and we have programs to serve patients in Primary Care with the delivery of medicines, home visits and home hospitalization,” Zúñiga added. 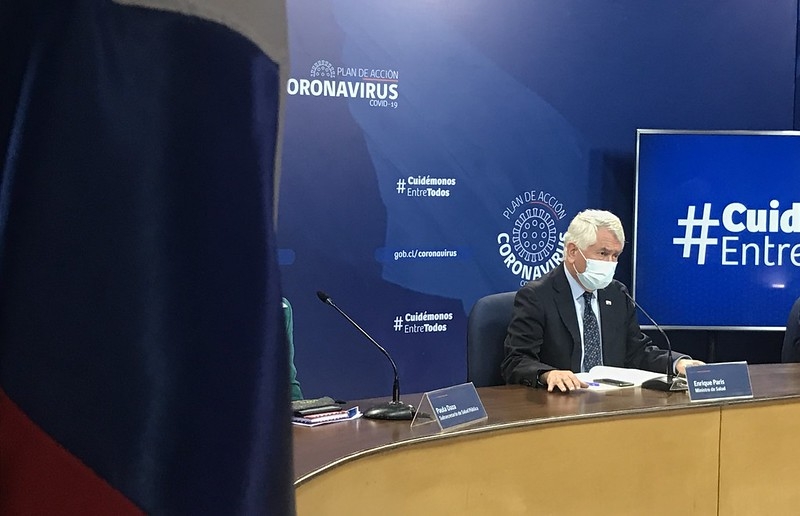 Health Minister Enrique Paris took advantage of the request to ask the Senate to pass legislation that increases the penalties for those who do not respect quarantine.

He added that it is intended to pass from 540 days to three years in prison for violators.

The minister asserted that the quarantine that governs a large part of the Metropolitan region should be extended “at least throughout June.”

Paris warned that a dark outlook for the disease in the country is expected in June and July, highlighting that “the worst is coming in June, I think. Or very bad. The first 15 days of July, I think we are going to maintain high figures.”

The secretary of state explained that the most optimistic reports maintain that only in August could the current “efforts” for the quarantines be exposed, which should continue “at least throughout June.”

“I think that only in August, if God wants, we will see the efforts of the quarantine rewarded, if people comply with them,” he added.

Likewise, he described as “impossible” that there be a return to classes before the month of August, still lacking studies and forecasts to give a clear date.

This Sunday, President Sebastián Piñera carried out a national chain to refer to the scope of the economic agreement that reached a resolution with the opposition, and in which different organizations participated.

“Today I want to appreciate and thank all those who came with good will to the call we made two weeks ago to build an agreement to protect the income of families and to recover the jobs and activity of our economy, within a framework of use effective and responsible for the resources that belong to all Chileans, “said the president.

SAN JUAN – Puerto Rican Governor Ricardo Rosello declared state of emergency Wednesday due to the Hurricane Maria, which is expected to be “more devastating than Irma”. In the morning, Maria was a category-2 hurricane […]

MONTEVIDEO – Accepting the Chilean offer, the Uruguayan Navy has initiated the process to receive three Cessna O-2A Skymaster aircraft. In April this year, a Uruguayan delegation visited Chile to evaluate the aircraft’s condition. The […]

SANTIAGO – Chile’s President Michelle Bachelet has highlighted the importance of protecting the environment at the 72nd United Nations General Assembly session, stating that it is impossible to close one’s eyes to the devastation of […]